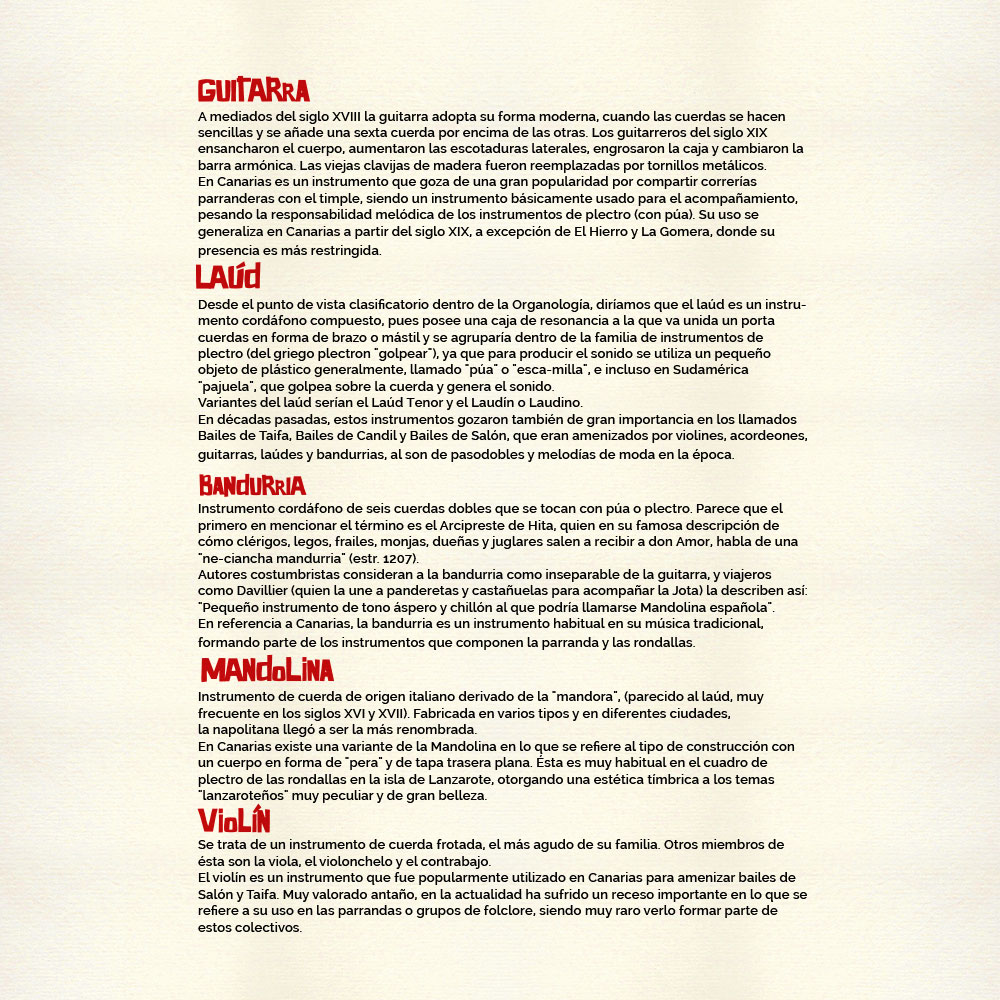 In the middle of the 18th century the guitar took its modern form, when the strings were made simple and a sixth string was added above the others. The guitar makers of the 19th century widened the body, increased the side notches, thickened the body and changed the harmonic bar. The old wooden pegs were replaced by metal screws.
In the Canary Islands it is an instrument that enjoys great popularity for sharing partying adventures with the timple, being an instrument basically used for accompaniment, weighing the melodic responsibility of the plectrum instruments (with a pick). Its use is generalized in the Canary Islands from the 19th century, with the exception of El Hierro and La Gomera, where its presence is more restricted.

From the classificatory point of view within Organology, we would say that the lute is a composite chordaphone instrument, since it has a resonance box to which a string holder in the shape of an arm or neck is attached and it would be grouped within the family of plectrum instruments (from the Greek plectron «to hit»), since to produce the sound a small plastic object is generally used, called a «pick» or «scale», and even in South America «straw», which hits on the string and generates the sound.
Variants of the lute would be the Tenor Lute and the Lute or Laudino.
In past decades, these instruments also enjoyed great importance in the so-called Taifa Dances, Candil Dances and Ballroom Dances, which were enlivened by violins, accordions, guitars, lutes and bandurrias, to the sound of pasodobles and fashionable melodies in the epoch.

Chordaphone instrument with six double strings that are played with a pick or plectrum. It seems that the first to mention the term is the Archpriest of Hita, who in his famous description of how clergymen, laymen, friars, nuns, dueñas and minstrels come out to receive Don Amor, speaks of a «ne-ciancha mandurria» (estr 1207).
Costumbrista authors consider the bandurria inseparable from the guitar, and travelers like Davillier (who joins it with tambourines and castanets to accompany the Jota) describe it as follows: «Small instrument with a harsh and garish tone that could be called Spanish Mandolin».
In reference to the Canary Islands, the bandurria is a common instrument in their traditional music, forming part of the instruments that make up the parranda and the rondallas.

String instrument of Italian origin derived from the «mandolin», (similar to the lute, very frequent in the 16th and 17th centuries). Manufactured in various types and in different cities, the Neapolitan became the most renowned.
In the Canary Islands there is a variant of the Mandolin in regard to the type of construction with a «pear» shaped body and a flat back cover. This is very common in the plectrum painting of the rondallas on the island of Lanzarote, giving a very peculiar and beautiful «Lanzarote» themes a timbral aesthetic.

It is a stringed instrument, the highest of its family. Other members of this are the viola, the cello and the double bass.
The violin is an instrument that was popularly used in the Canary Islands to liven up Ballroom and Taifa dances. Long valued in the past, today it has suffered an important recess in terms of its use in parrandas or folklore groups, being very rare to see it form part of these groups.