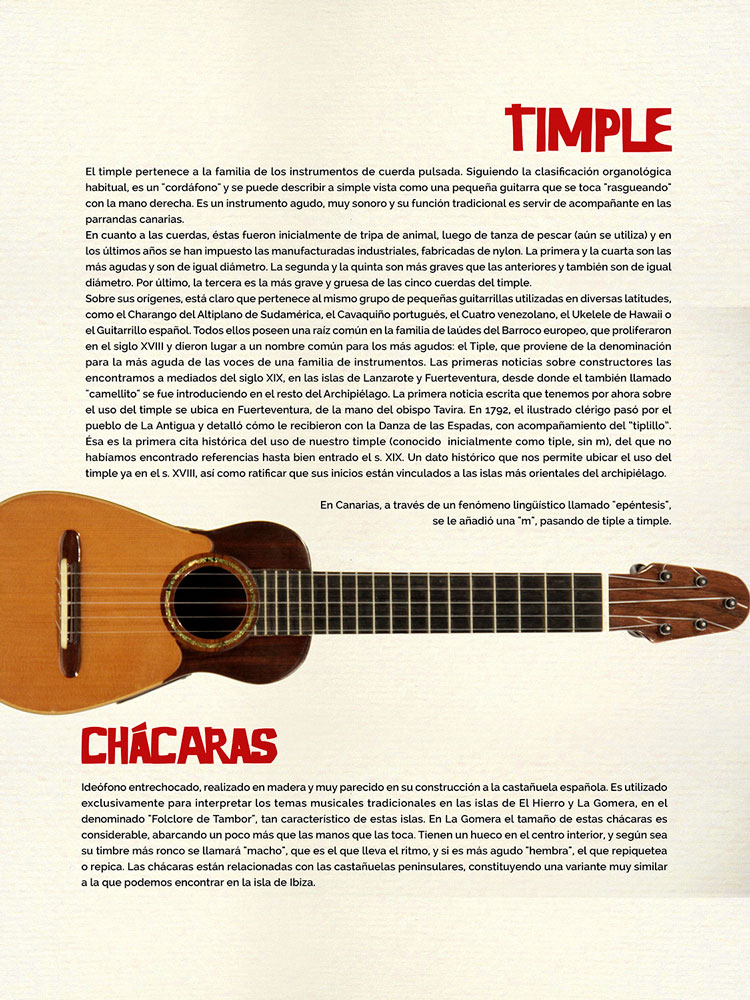 The timple belongs to the family of plucked instruments. Following the usual organological classification, it is a «chordaphone» and can be described with the naked eye as a small guitar that is played «strumming» with the right hand. It is a sharp instrument, very sonorous and its traditional function is to serve as a companion in the Canarian parrandas.
As for the ropes, these were initially made of animal gut, after fishing line (it is still used) and in recent years industrial manufactured ones, made of nylon, have prevailed. The first and fourth are the sharpest and are of equal diameter. The second and fifth are more serious than the previous ones and are also of the same diameter. Finally, the third is the lowest and thickest of the five timple strings.

Regarding its origins, it is clear that it belongs to the same group of small guitars used in different latitudes, such as the Charango from the Altiplano of South America, the Portuguese Cavaquiño, the Venezuelan Cuatro, the Hawaii Ukulele or the Spanish Guitarrillo. They all have a common root in the European Baroque family of lutes, which proliferated in the 18th century and gave rise to a common name for the sharpest: the Tiple, which comes from the name for the sharpest of the voices of a instrument family. The first news about builders can be found in the middle of the 19th century, on the islands of Lanzarote and Fuerteventura, from where the so-called «camellito» was introduced to the rest of the Archipelago. The first written news that we have for now on the use of the timple is located in Fuerteventura, by the hand of Bishop Tavira. In 1792, the enlightened clergyman passed through the town of La Antigua and detailed how they received him with the Dance of the Swords, accompanied by the “tiplillo”. This is the first historical date of the use of our timple (initially known as tiple, without m), of which we had not found references until well into the s. XIX. A historical fact that allows us to locate the use of the timple already in the s. XVIII, as well as ratifying that its beginnings are linked to the easternmost islands of the archipelago.

In the Canary Islands, through a linguistic phenomenon called «epenthesis», an «m» was added, going from tiple to timple.

Chopping ideophone, made of wood and very similar in its construction to the Spanish castanet. It is used exclusively to interpret traditional musical themes on the islands of El Hierro and La Gomera, in the so-called «Drum Folklore», so characteristic of these islands. In La Gomera the size of these chácaras is considerable, covering a little more than the hands that touch them. They have a hole in the inner center, and depending on their hoarseness, it will be called «male», which is the one that carries the rhythm, and if it is sharper, «female», the one that peals or rings. The chácaras are related to the peninsular castanets, constituting a variant very similar to the one we can find on the island of Ibiza.
Esta página utiliza cookies y otras tecnologías para que podamos mejorar su experiencia en nuestros sitios:    Configurar y más información
Privacidad